Why “Nones” Are Leaving the Church

This essay originally appeared on dotCommonweal on September 23, 2016. 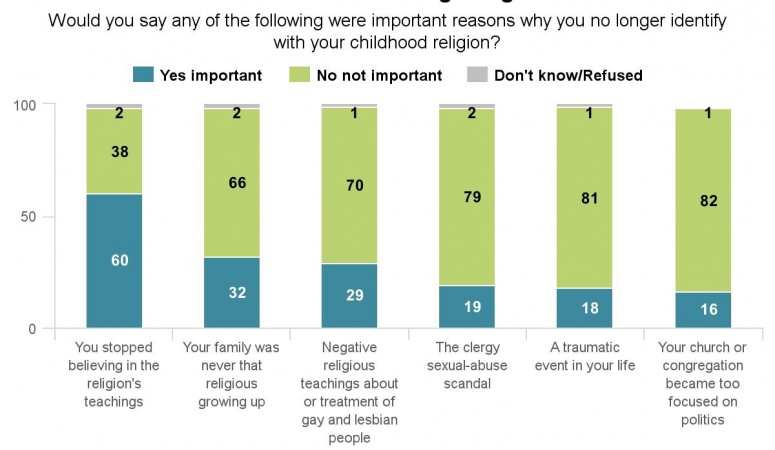 The most significant demographic trend in American religion today is the rapidly growing numbers of “unaffiliated” or “nones.” The data has spoken clearly for years, with a rise from about 5% in 1972 to about 25% in 2016. More importantly, almost 40% of those between the ages of 18 and 29 are religiously unaffiliated. This is no mere life-cycle effect, as has been so common in the past. If you find yourself gazing at empty pews this weekend and thinking, They’ll come back when they have kids of their own, you’re in denial.

To the contrary, this is an epochal societal shift disguised as a life-cycle effect, and it remains foolish to avoid the numbers. Recent books by Kaya Oakes and Elizabeth Drescher, among others, have given voices to these numbers. Queries about what the nones do after they leave their religious communities—how they live out their days as spiritual not religious, or multi-religious, or anti-religious—will continue to occupy more and more of our bookshelves. But the prior question of why they leave in the first place is also still being asked.

Yesterday the Public Religion Research Institute (PRRI), an increasingly indispensable organization for the study of religion, released a report about why they leave. The report, based on August 2016 phone surveys, might be thought of as a compilation of anonymous exit interviews: real people offering real reasons, with nothing to hide or prove. Not all the answers are surprising, but some of them should be required reading for pastors, catechists, and parents.

The chart above shows the main reasons why people report having left their religious community. For parents, the top two reasons deserve special attention. As the first and best educators in faith, culture, ritual, and ethics, parents profoundly affect their child’s likelihood of religious affiliation. A lack of affiliation (and its outward manifestation) on the part of parents was the second most common reason given. Parents also join with catechists and pastors to educate children about a religion’s beliefs. If 60% report leaving because of lack of belief, that must be in part because those beliefs were not presented in the most reasonable manner or in a way that connected with the child’s experience. If parents and other leaders don’t have coherent responses to questions about evolution, the resurrection, or various forms of prayer and devotion—not even to mention the thornier questions of contemporary ethics—then how can younger members nourish their incipient beliefs?

Most importantly, all church leaders should meditate on the third most common answer given: “negative religious teachings about or treatment of gay and lesbian people.” Almost 30% of respondents reported this as an important factor in the decision to leave. And among the Catholic respondents, the number climbs even higher:

Notably, those who were raised Catholic are more likely than those raised in any other religion to cite negative religious treatment of gay and lesbian people (39% vs. 29%, respectively) and the clergy sexual-abuse scandal (32% vs. 19%, respectively) as primary reasons they left the Church.

Let that sink in. Almost 40% of Catholics interviewed cited this very specific reason. On this point, the data is strong and getting stronger. For younger generations—and “young” stretches into current thirty- and forty-somethings as well—the moral status of homosexuality has simply moved to another region of the brain from that of other vexing moral questions. This is a matter not of normative argument but sociological description, backed up by poll after poll and corroborated by longitudinal studies, such as Robert Putnam and David Campbell’s peerless book, American Grace.

Most religious people make moral evaluations through a combination of appeals to revelation, reason, and experience. What do scripture and tradition say? What does my logical thinking conclude? And what have I personally experienced that puts flesh on the bones of those arguments? In the case of the moral status of homosexuality, it seems clear that a tipping point was reached in the past decade, whereby people’s reason and personal experience have overwhelmed the appeal to revelation.

What is the upshot for church leaders? Any comment a leader makes about gays and lesbians—from a magisterial pronouncement to a small remark in a pulpit or classroom—must be chosen with these high stakes in mind. With regard to how gays and lesbians are spoken of in church settings, there is no margin of error. Any expression of negativity and ostracization from the pulpit will be heard from the pew as an irredeemable affront to friends and family—or one’s very self. And next week, that same pew will be empty.

Michael Peppard is associate professor of theology at Fordham University.