The Russian Church: Profiting by Silence 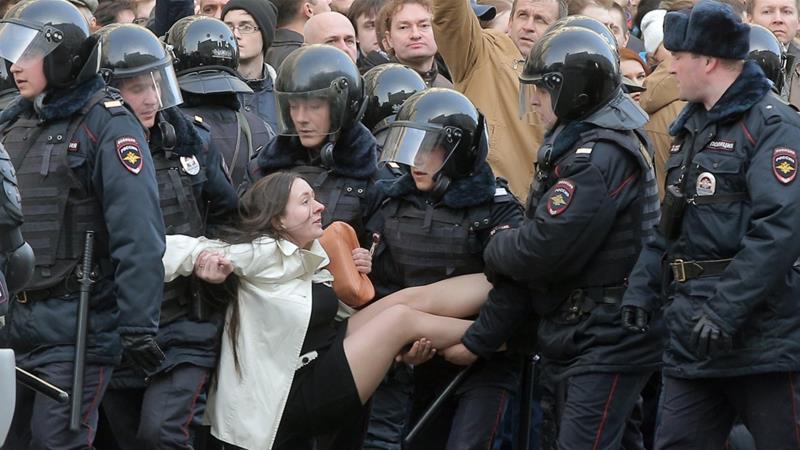 Last Sunday Russia saw a wave of protests against corruption in the upper echelons of power. Masses took to the streets ignited by the investigation of the Anti-Corruption Foundation titled “He is Not Dimon for You,” which focused on the alleged corrupt affairs of Russian Prime Minister Dmitry Medvedev. The outcome of these events surprised everybody, including the government, the organisers of the protests, and society at large.

Firstly and most importantly, Alexei Navalny, the author of the investigation who had previously announced his bid to seek the presidency in 2018, managed to lead tens of thousands of people out to the streets all over Russia, from Vladivostok to Voronezh. Nobody, the organisers included, expected the protests to achieve such scale. In many cities, the rallies remained unauthorized and led to people being arrested despite the peaceful nature of these demonstrations.

Secondly, the state-run TV stations have ignored the most massive protests in recent years altogether. And the level of control exercised by the state over the media has become even more obvious, since for those accustomed to learning the news from the ‘box’ there was absolutely nothing happening on the streets of the country that day. The only political party incapable of commenting on the events of the day was the ruling party, United Russia.

Thirdly and most unexpectedly, for the very first time in the history of Russia, high schoolers were a considerable part of the protesting masses. Out of 1,030 detained protesters in Moscow, 46 were underage.

To what extent should the Russian Orthodox Church react to political demonstrations that kick-start a presidential campaign? On the face of it, the answer is obvious: the Church should mind its own business and keep silent.

However, at the heart of it, the situation is much more complicated. The protests sweeping through the country aimed to highlight the grave illness destroying Russia that is corruption. It would seem natural for the Church to support rallies against thefts of particularly large sums of money. After all, it is impossible to expunge the ‘thou shalt not steal’ commandment from the Bible.

The thing is, though, that the hierarchy and rich clergy have the same living standards and consumption levels of the civil servants. However, compared to the latter, they fall under significantly lower accountability and transparency requirements. In today’s Russia, nobody raises the question whether the Church participates in the corrupt practices of the state or creates its own schemes. Yet, there is no guarantee those questions will not be asked tomorrow or, at the latest the day after.

Let us assume that raising a voice against corruption does not suit them. But that makes it even more pressing to take a stand against unjustified violence towards the peaceful protesters, or at least towards the minors. Such a move would have been commendable and would have strengthened the Church’s authority in society.

The Church, however, chose to remain silent.

Among those detained and beaten by police forces was Gregory Hill, the underage son of an Orthodox priest and a British subject who was not part of the protesting crowd and whose only fault was failing to produce his papers immediately upon request. In the words of his mother, “Grisha [Gregory] is bruised because one policeman was holding his head to the ground, while the other kicked him in the groin and ribs. We are shocked by the comments from the city government that police reacted in a competent way and ensured security in heavily crowded areas. I very well see that ‘competence’ on Grisha’s face.”

Another person detained was Alexey Minyaylo, an acolyte at the Moscow University home church of St Tatiana. The rector of this parish is Fr. Vladimir Vigilyansky, the Patriarch’s former press officer and, in times past, reporter for the key Perestroyka-era magazine Ogonyok. An active blogger himself, Fr. Vladimir failed to mention that his acolyte had been arrested and de facto put to torture: he had been thrown into an overcrowded cell and deprived of water or food. It was Moscow human rights defenders who spread the news.

Meanwhile, the Church could have easily made concerted aid efforts just as it does with disaster relief.

Unfortunately, the ‘churchlike silence’ of the official Church came as no surprise. It preferred to overlook the rallies, for it failed to find the words with which to respond to those protests.

The muteness of the Church results from a close cooperation with the state and full neglect of the society’s interests. When, as in the case of anti-corruption protests, the state goes against society, the Church then takes its place at the side of the state.

The Church has even deprived itself of the chance to react in a subtle way, interceding for those who faced unlawful violence. After the odes to violence and ‘sacred wars’ sung by archpriest Vsevolod Chaplin or the violent acts of the God’s Will (Bozhya Volya) activists’ group, Orthodox people tend to endorse violence against one’s neighbours rather than disapprove.

Six years ago, the Church sent a very important signal to the state. It was a pledge of full allegiance irrespective of the situation in the country. “The Church will never become a force opposing the state power,” was the explicit assurance given by a member of the Patriarch’s immediate circle, head of the then Synodal Information Department, Vladimir Legoyda. The Russian Church remains loyal to that oath to this day.

High schoolers’ participation in the protests became the key discussion topic for all more or less independent media and on social networks. However, the top concern was not the evidence that police had treated them as aggressively and brutally as they had treated the grown-up protesters. The very fact of them taking to the streets changed the perception of the way the Anti-Corruption Foundation really affects society.

Various researchers point out that in some way the high schoolers fell victim to state propaganda. Year after year, they had been fed with slogans and calls to fight corruption but never saw results of this war. And when, due to Navalny’s invitation, they got the chance to express their disapproval of corruption, they fearlessly joined the rally.

Here it must be stressed that these youngsters were motivated not by political issues but by moral ones. “Teenagers (…) primarily speak of morals, justice and honesty. For example, one gave this rather characteristic argument: I want to be able to look into the eyes of my children in 20 years and not be ashamed for what I did today.”

One of the men of the day of March 26 was a fifth-grader from Tomsk, Gleb Tokmakov, who addressed the rally with a call to change the Constitution and the Criminal Code of Russia so that they would serve the citizens. One of the stories that went viral in Moscow that day was about two high schoolers who climbed a lamp post in the city’s Pushkin Square.

The rigidity of police reaction morphed into an important lesson of the new civic experience. Without a doubt, the younger generation will remember and process that lesson. Those who met at rallies are now creating new groups on social networks. They see that their parents, even those who were not aware of their kids’ participation in unauthorized protests, generally support them in their civic activity.

It cannot be ruled out that the second wave of repressions against protesters will wash over schools, colleges, and universities. Yet, a great many of the kids, their parents, and NGOs are already prepared for this.

And what about the Church? The greatest problem, realized neither by the hierarchs nor by the clergy, lies in the Church losing its youth. The young ones, even those still in school, are looking for truth. In these intense and sincere searches, they do not see the Church as their ally. Moreover, they do not know whether the Church is interested in a quest for truth and justice, or whether it is ready to throw its weight behind human dignity. The Russian Church is speechless, and that is a one-way ticket to seeing the young parishioners tilt toward being ‘nones.’